RECORD NIGHT FOR THE VILLAGE PLOUGHMEN 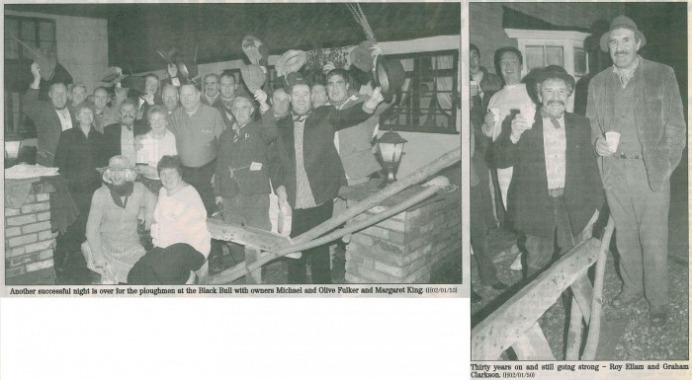 Balsham residents were treated to the strange sight of grown men dressed in traditional style carrying a plough to the music of morris dancing on Monday night.
But the goings-on were not unexpected as villagers united to celebrate the 30th anniversary of the revival of Plough Monday.
Traditionally, the ploughmen are invited into people's homes for refreshments and collect money for charity.  This year was no different and a record £1,760 was raised for Mid Anglia General Practitioners Accident Service (MAGPAS), Balsham Church Restoration Fund and the purchase of a second bench for the newly planted village Millenium Wood.
Plough Monday Club secretary, Jan Ellam, told the Echo "It was a very, very good total and we would like to thank all the hosts and people who turned up.  Their support was brilliant and it was one of the nicest Plough Mondays we have had"
The money was raised through donations from the five-hour tour and a raffle with a first prize of a chauffeur-driven trip to the London Eye.
The ploughmen party included two original instigators fron the 1972 revival, Roy Ellam and Graham Clarkson who have not missed a single outing since.

Graham said "We do it to raise money for good causes and it's a good laugh".  Roy added that the major change in the last 30 years had been the amount of people on the night which continued to increase.
At the other end of the scale, it was 28 year old Justin Merry's second time as a ploughman.  But what makes his effort more remarkable is, having been born and bred in Balsham, Justin returns to the village from his Haverhill home to celebrate the night.  "I have always wanted to join in with the tradition which is part of the village", Justin, whose parents still live in Balsham, admitted.
The pre-arranged stops around the village were made even more welcoming with home-owners inviting neighbours to help entertain.  For the first time, Paul and Regan Neaves, of Horseshoe Close, opened their doors and thoroughly enjoyed the experience.
Regan said "It is part of village life within Balsham and it is nice to be part of it.  We knew about the tradition but they have never come to Horseshoe Close since we moved here".
Entertainment came courtesy of the Cambridge Morris Men who also pointed to the enjoyment of the night as the reason they continue to support the event.
The evening ended at the two village pubs, the Bell and the Black Bull, where the ploughmen bowed their heads and observed a minute's silence in memory of a founder member, the late Jim Daniels.