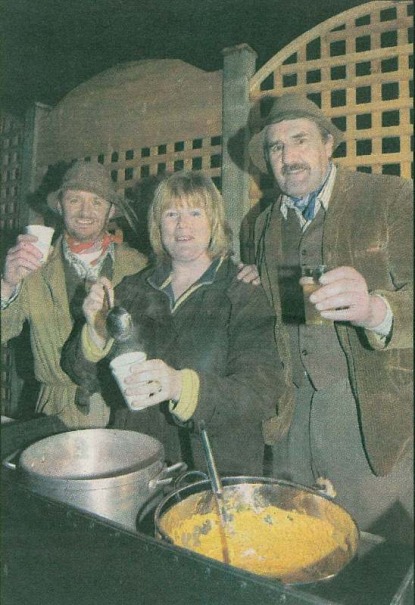 Mark Addley, Annie West & Graham Clarkson at The Rookery
PLOUGHMEN KEEP THE OLD TRADITIONS ALIVE FOR CHARITY
"It's a bit bizarre" was the comment of one bystander who watched Morris men and Ploughmen congregate in a Balsham cul-de-sac on Monday night.  The costumed men were in Queens Close for the start of Plough Monday, one of the highlights of the village's year.
They re-create an ancient tradition when ploughmen left jobless in the winter months asked for money from rich landowners  If their requests were denied, they would plough the landowner's gardens. Nowadays, the Ploughmen do not ruin people's gardens and they collect money for charity - they have raised around £30,000 since reviving Plough Monday in 1972.  Their first collection raised just £72 for the village's church tower fund but th is year they raised around £1,600 for the village newsletter and war memorial restoration.
Sixteen Ploughmen took part this year, ranging in age from mid-20s to 74, and they were joined by eight Cambridge Morris Men.  They stopped off at various homes around the village for a feast and a dance, including Tracey Johnson's home in Queens Close.
This was the first time she had hosted a Plough Monday gathering, after being asked by a neighbour, who is a ploughman.  "It's a nice thing to do and really gets everyone together" she said.  One of the longest-serving Ploughmen is Roy Ellam, who has attended all 33 Plough Mondays.  "I vaguely remember the first Plough Monday" he said.  "It's just the camaraderie and the spirit of the thing I enjoy.  Everyone joins in and you're all like one big team".
The Ploughmen were kept in check by James Kiddy, who has been Squire for four years. "I took the job on from my father, David, who was Spire for 27 years" he said. "It's good fun and [other good things are] the money we raise for charity and keeping the older traditions alive."
The finale of Plough Monday was held at the village's pub, the Black Bull, where the Ploughmen paid tribute to Jim Daniels, the man behind the event's revival, with a minute's silence.  He died five years ago but the current Ploughmen hope to continue his work for years to come.
"Once you're a Ploughman, you're always a Ploughman" said Mr Kiddy. 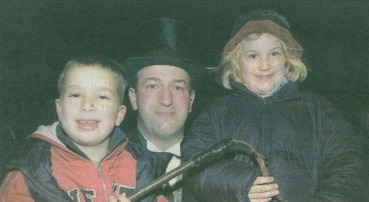 Squire James Kiddy with his children, Sam and Megan