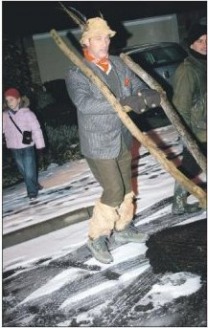 ANCIENT TRADITION RETURNS TO VILLAGE
The ploughmen and morris dancers descended upon Balsham once more on Monday, threatening to dig up residents' lawns unless they contributed money to the "poor ole ploughboy".  This ancient tradition came about because during the winter weather, the ground was too hard for ploughmen to work and therefore earn their keep.
LAWNS SPARED BY VILLAGE'S PLOUGH GENEROSITY
Balsham celebrated the annual Plough Monday event with Morris dancers pulling a plough through the streets of the village to raise over £1,900 for charity.  The event began in Fox Road with the plough being pulled uphill around the village, finishing the evening at the Black Bull.
The event was revived in the 1970s as a celebration of local culture.  The charity parade originally saw ploughmen ask residents for money and threaten to plough up their lawns if they did not offer any.  This year, Plough Monday raised £1,950 for local causes.  The money will go to the First Balsham Guides, Balsham Colts Football Club and MAGPAS First Responders. 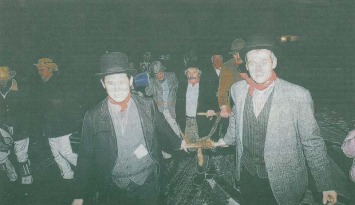 Secretary of Balsham Ploughmen Club, Janice Ellam, said "I think it was a very successful night given the weather and the economic downturn.  The amount we raised is a little down on last year but not by as much as we were expecting.  The people of Balsham are always very generous.  We had a fantastic night and some of the Morris men kept dancing long into the morning.  We are appreciative of all our hosts, particularly as it was such a cold night.
Andrew Dadd and Harry Kitchener were among the Morris men.  "It is always very enjoyable and a fantastic evening" said Mr Dadd from Duxford.  "It is nice to see the people having a good time and the community spirit is very good and that's lacking in many places.
Mr Kitchener, from Over, said "Everyone had lots of fun and we always feel very welcome.  It is a great event nationally, not just for Balsham, and it's a shame there are so many people who know nothing about it".
Laura Rayment was one of the Balsham residents who braved the cold to enjoy the parade.  "My uncle is a ploughman and we do it every year" she said.  "It's good for the community to be raising money for the village and it's great to see that people always want to get involved."