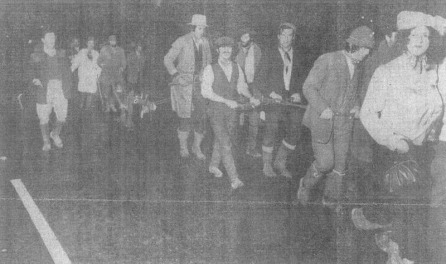 The plough is pulled through Balsham
PLOUGH POWER PULLS IN PROFITS
Pay up or be ploughed up. That was the choice residents of Balsham, near Cambridge, had to make on Monday night when the custom of Ploug Monday was revived in the village.  The plough was dragged round the village by six "horses".  They asked villagers to give money towards the village church tower. And those who dared to refuse did so at the risk of having their lawn ploughed up.  Speaking to Mr Rodney Beeton of 34 Mays Avenue, Balsham, he said "it is the first time we have held the ceremony since 1952 although before that we think it had been going on for at least 200 years".

"Originally the custom came from the North-East - on the first Monday after the twelfth day the ploughboys used to go round begging for beer money", Mr Beeton continued.  "We still have the original old plough which was used in this village, but for this occasion we made a replica out of old oak timbers.  I should think the wood for it is over 100 years old.  Nobody could have refused us. After all, they couldn't afford to have their expensive lawns ploughed up."

The ploughmen were accompanied by members of the Linton Friday Folk Club.  They raised £65 for the church tower which will have to have £10,000 spent on it before it is completely restored.