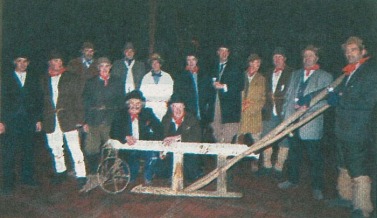 FURROW THE LEADER: A CENTURIES OLD TRADITION WAS RE-ENACTED IN BALSHAM ON PLOUGH MONDAY
The Balsham Ploughmen have been on their travels again and have raised £1,754 for good causes in and around their village.
They toured the village on Monday in their annual re-enactment of a centuries-old tradition where ploughmen used to knock on doors of houses in the village looking for money for beer.
Among the good causes to benefit from the Ploughmen's money will be Little Wilbraham boy, Joshua Haynes, who suffers from cystic fibrosis and needs the money to pay for his treatment at the Peto Institute in Hungary.  In Balsham, the main beneficiaries will be the village sports pavilion which needs more tables and chairs, the Balsham Carpet Bowls Club, which needs a new carpet, and Buttercups Pre-school.
The Ploughmen's tour took in West Wickham Road and Old House Road before finishing outside the Bell pub.

Community Spirit and tradition are not seen too often in villages these days but this was not the case in a small part of Cambrideshire on Monday night.  Almost 20 men toured homes and pubs in Balsham to raise money in the annual Plough Monday event.
Now a fixture for 31 years in the village, the ploughmen retraced the ancient steps of farmers hwo used to ask for money from rich homeowners after being laid off during the winter months.  If their requests were denied, they would plough up the front lawns.
Alison and Andrew Clarke were one of the many homeowners who opened their doors to the ploughmen.  Alison, of Woodhall Lane, said "The Ploughmen do so much for charity and we are always more than happy to help them.  It gets all the villagers together and it is nice to raise money for things in the village"
Each of the ploughmen has their own story to tell.  Steve Meekings of the Rookery and Phillip Smith of Princes Close were enjoying their first Plough Monday while the night is always special for Roger Scotland, 35, also of Princes Close.  Roger's grandfather was one of the frontrunners for restoring the tradition just over 30 years ago and he even recalls following the men by push-bike as a youngster.  "Balsham is a great village but, without things like Plough Monday, it woulldn't be great" he said. "There are so many new houses in the village, it is fantastic to keep the tradition going".
Squire, James Kiddy, said "The night was as good as usual with everyone enjoying themselves and being very generous.  It is an old tradition that we like to keep going".
Jan Ellam, secretary of the Balsham Plough Monday Club, said more than £1,600 was raised from the night.  This will be split between the village sports pavilion, Balsham Carpet Bowls Club, Buttercups Pre-school and the Joshua Haynes appeal.
Joshua, from Great Wilbraham, has cystic fibrosis and the sppeak is raising money to send hin to Hungary for treatment.  Jan said "I felt the night went very well and we had really good support from all of the village.  The ploughmen really enjoy what they do - the money is nice but really and truly they do it for the enjoyment".